Proof of Work vs Proof of Stake

Newcomers to cryptocurrency often have trouble understanding how the mining mechanism works. The idea that there is a cryptographic algorithm that mined new coins and rewarded those who contributed to the maintenance of the blockchain is not an obvious concept and it takes some explanation to understand.

In Proof of Work consensus, when a block is validated each node competes to solve a guessing game problem to validate the block of data. Random guesses are most efficient in order to solve this problem. Having a lot of processing power on your computer will result in a higher amount of guesses per second and thus a higher chance of being right first. The random string of numbers which the miners are competing to find first is also known as the nonce. All the block data plus the current guess are run through a cryptographic hash. Does the output match the current level of difficulty, the miner’s guess was correct.

The difficulty of mining is automatically adjusted by the network. For example: when part of the network is unable to participate in guessing the nonce this results in a decrease of the total hash rate. In this case the difficulty will decrease in order to keep the average time it takes to mine a block consistent. An increase in the hash rate will result in an increased difficulty.

When a miner believes he has the right guess he will propose his guess to the network. The other miners will then combine the guess with their block data. When 51% of the miners agree that the guess is correct the block will be added and the miner is rewarded in the platform’s own cryptocurrency. If more than 51% disagrees with correctness of the guess the block will not be mined, no reward will be given and the miner will incur sunk costs.

Proof of Work achieves to provide each node with an incentive to behave honestly. Dishonest nodes will experience costs with no chance of being rewarded.

Cons of Proof of Work

Mining for a block within a Proof of Work requires computer power, this, in turn, requires energy. In the case of Bitcoin, this energy consumption has grown quite a lot and this will only keep growing.

Another problem with Proof of Work is that while at the beginning of Bitcoin, for example, people would be able to mine from their personal computers. Now, however, mining has grown into a large scale activity for businesses making use of so-called mining farms housing thousands of dedicated computers with one goal, mining Bitcoin. This results in an increased difficulty making it impossible for people mining from their personal computers to guess the nonce first. To summarize, due to high capital requirements the hash rate will be controlled by a select few, having a significant impact on the decentralization of the network. 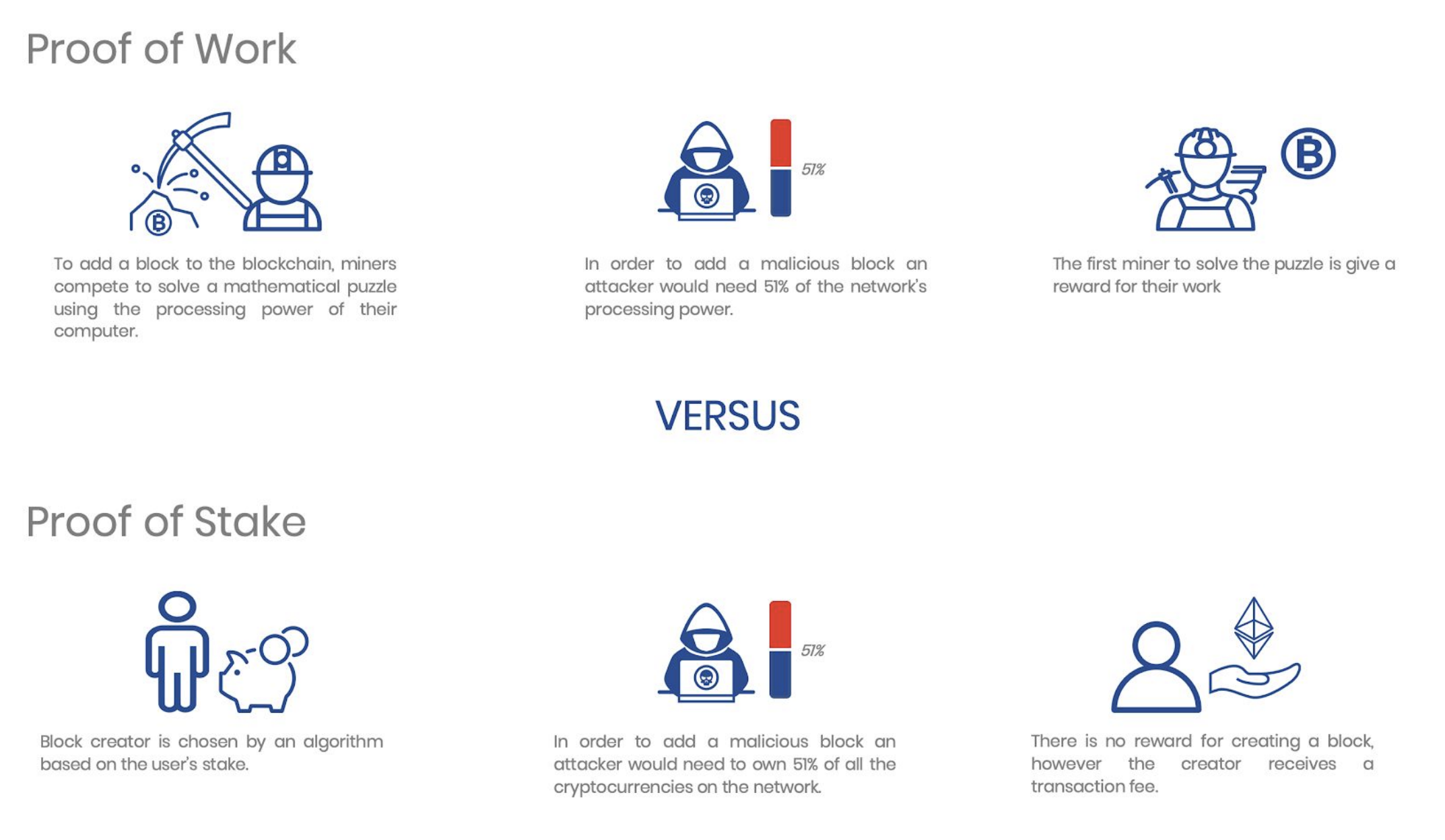 Proof of Stake is a newer and unproven consensus mechanism that has been proposed as an alternative to Proof of Work consensus to solve the scalability and cost concerns in Proof of Work. With Proof of Stake the guessing is removed, eliminating the need for computer power. Proof of Stake consensus uses a system where nodes each give or pay a stake in order to validate transactions. When it’s time for group consensus, nodes get the possibility to lock up coins and thus staking them.

A random node is selected and the hash of that node’s block data is shown to all other participants. All other nodes wager on the validity of the block transactions. If the majority agree with the proposed block, the random node is rewarded as are all who wagered on that node. If the majority disagree, the random node loses its stake, gets no reward, and a new node is randomly selected to share their block data. The game theory incentive toward honesty and accuracy is maintained, only the mechanics of how it's enforced are changed. The key difference with this consensus is that no computing is ever performed during consensus, only wagering and any kind of device can wager, regardless of computing power.

Contrary to the proof of work principle, which rewards you for the work you have done, proof of stake will reward you for the number of coins you have in your possession. People now have a reason to hold on to the coins and are rewarded for doing so. Moreover, the risks of centralization are minimized because those with the most mining potential or capital are no longer in control. It is important to note however that the rise of staking pools should not come as a surprise.

51% attacks are a minor concern for the Bitcoin network because you have to have more than 51% of the computing power on the network. For a 51% attack to occur within a Proof of Stake network the malicious actor would need to control the majority of all the network’s cryptocurrency which is expensive and also risky since the crypto will lose value when it gets out that it is under attack.

Since the incentives are different, the proof of stake algorithm is essentially changing the whole structure of the market for a cryptocurrency. Just by holding the cryptocurrency you can earn additional coins.

The risks of Proof of Stake (PoS)

As with any solution, there are risks associated with the possible implementation of proof of stake algorithms. The greatest inherent risk of a proof of stake system is that the bad players are not diluted in the same way as in the proof of work system. They can continue to collect interest while voting for blocks, and not be harmed in any way. In order for the proof of stake system to work, this problem will eventually have to be solved, but at the same time it shows a lot of potentials.

Coinmerce is a Dutch, fiat ⇄ cryptocurrency trading platform that focuses entirely on usability and simplicity to offer its users a safe, educational, simple and enjoyable experience.

The Coinmerce platform is connected to various external exchanges and bundles liquidity through its smart order system in order to automatically offer the best prices to its users.