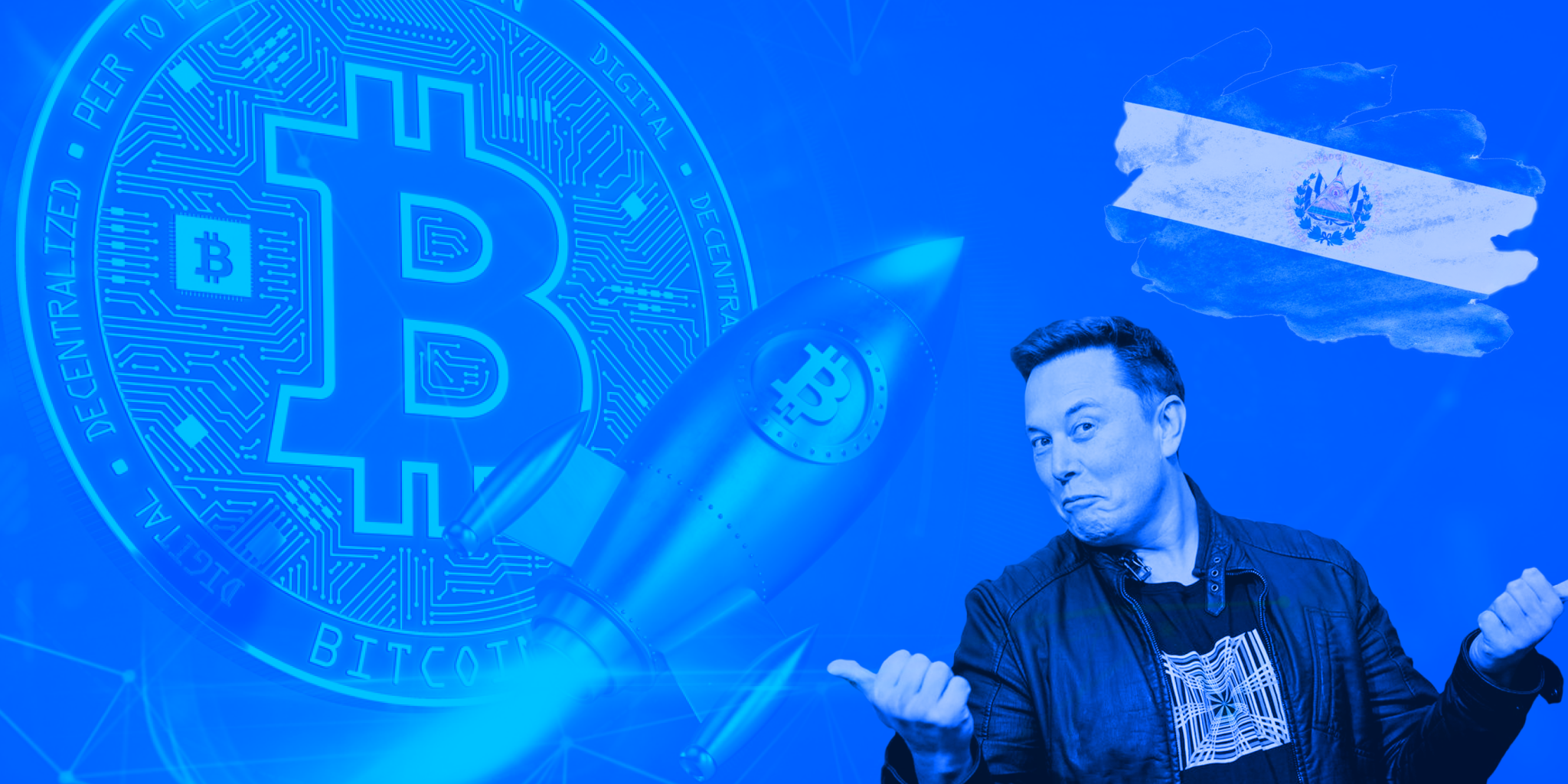 The year 2021 is over and it has been a hectic year in all respects. This year, like 2020, was dominated by Covid-19. The economy is suffering, but more importantly, the mental health of many is also suffering. 2021 is the year that the impact of this virus becomes all the more apparent, but that does not mean good things did not happen in 2021.

One sector that really blossomed this year was the crypto sector. Not only did the prices of various cryptocurrencies rise hard this year, but the number of crypto-related companies, as well as the revenue of those companies, also increased dramatically. However, for those with a weak heart, it may have been a less fun year after all, because for crypto, 2021 was a year full of highs and lows.

We got to experience the great news of Tesla accepting Bitcoin as a means of payment, but not much later also the bad news that this was discontinued. We have seen Bitcoin (BTC) go to $63,000, and back to $30,000, the same price Bitcoin had at the beginning of the year. In any case, there is plenty to look back on, so here we have listed the most important events of 2021 for you! Read along if you want to let crypto 2021 sink in a little more.

At the end of January, Tesla CEO Elon Musk even came on with a new Twitter bio: #bitcoin. This "news" heavily benefited the crypto market, as a new rally began in February. The price shot up to $57,000 and other coins also reached new all-time highs.

This rally was driven by an even bigger announcement from Tesla in February. The electric car manufacturer released the news that it had made a $1.5 billion investment in Bitcoin.

In March, Bitcoin managed to hit another record high of $61,000, but attention was drawn to NFTs (non-fungible token). Jack Dorsey auctioned off the first-ever tweet as an NFT and Beeple sold an NFT for a record $69 million. The end of March brought three more big news items for the crypto industry.

Tesla announced it would start accepting Bitcoin as a payment method for their cars and said it would not convert these BTC to fiat money. PayPal announced the launch of a payment service, allowing users to make payments with BTC, ETH, LTC, and BCH. Visa entered into a partnership with Crypto.com. Three of the world's largest companies were closely involved with the crypto world in one fell swoop.

The second quarter of 2021 began with explosive growth in altcoin prices, while Bitcoin consolidated around $60,000. A little later, however, the two giants, Bitcoin and Ethereum, caught up. On April 14, Coinbase officially became a publicly-traded company, and in anticipation of that event, BTC and ETH also rose. On April 13, BTC reached a record high of $63,500.

However, April was also marked by a negative news report from China: Mining was banned. Shortly after the Coinbase listing, the Bitcoin price fell back to $50,000, with a brief recovery to $58,000 in late April. The memecoin Dogecoin (DOGE), however, had all eyes on it at the time.

In late April and early May, DOGE went through a surreal surge, powered by tweets from Elon Musk. On Twitter, lots of people said that DOGE would go to $1 (as a joke), but this turned out to be almost reality. DOGE reached an all-time high of $0.67 on May 7. Shortly after this, not only did DOGE's price collapse but so did the rest of the crypto market.

Elon Musk mentioned that Tesla stopped accepting Bitcoin as a means of payment due to sustainability concerns. At the end of May, Bitcoin was at $35,000.

In June, the downtrend continued. Market sentiment was very fearful, but there were some bright spots.

El Salvador's president, Nayib Bukele, revealed his plans to adopt Bitcoin as legal tender. Within 90 days, El Salvador would be the first country to accept Bitcoin. Elon Musk also said that Tesla would again accept Bitcoin payments once it is clear that miners have switched to renewable energy.

However, the bright spots were not enough and July would be an even worse month.

The third quarter started poorly and was also the 2021 low for Bitcoin. In July, the price stood at around $30,000, just as it did at the beginning of 2021. Ethereum, however, performed better with the London hardfork in sight, an upgrade to the Ethereum network that should bring down transaction costs. In late July, the Bitcoin price also rebounded to $40,000 after Elon Musk expressed his belief in a green future for Bitcoin.

This trend continued in August, with market-wide gains and a high of $50,000, August was a green month, but the real focus was once again on NFTs. NFT marketplaces like OpenSea reached record volumes, and prices of NFT collections like Bored Ape Yacht Club and Crypto Punks skyrocketed.

The cryptocurrency Solana (SOL) also attracted a lot of attention with the huge increases it experienced. The currency rose from $35 in early August, to $190 in early September, an increase of over 450% in just one month.

In early September, El Salvador also made its first Bitcoin investment. The country purchased a whopping 200 Bitcoin, worth $9.5 million at the time. The BTC exchange rate continued to rise to $52,500 but closed September slightly lower at $44,000.

October was greatly anticipated, as past experience has shown that October is often a very good month for cryptocurrencies.

It quickly became clear in early October that the solid declines earlier this year were not yet signs of a long-term bear market, as we saw after the crypto hype in 2017. October was a green month and Bitcoin (BTC) reached a new all-time high of $66,000. The biggest news of the month was the first U.S. Bitcoin futures ETF. Bitcoin could be traded indirectly on the largest U.S. exchanges starting October 21.

On November 8, as a result of all the positive news the weeks and months before, Bitcoin reached its highest point ever, $68,000 to be exact. That same month, El Salvador also announced plans to build a "Bitcoin City," a city that revolves entirely around Bitcoin and Bitcoin payments. Still, at the end of November, the Bitcoin price stood at $57,000, down $11,000 from its peak.
The last two months of the year were dominated by historically high inflation and the fear of interest rates that come with it. High-interest rates are generally a bad sign for investments and the market responded with a sell-off. In the meantime, the term "Metaverse" had taken the forefront.

In late October, Facebook announced it was rebranding to Meta, with the goal of creating the virtual world. Cryptocurrencies such as Decentraland (MANA) and the Sandbox (SAND) responded with explosive increases, and the Metaverse was the new buzzword within crypto communities.

At the same time, Bitcoin and the bulk of the altcoins continued to decline in December, forcing the Metaverse to step back into the background. December was mainly dominated by the fear of a possible trend reversal. Bitcoin broke down through key support levels and many people were not sure that it could continue the bull run of 2021.

2021 was an eventful year for the crypto world. Huge strides have been made, but countries are starting to get increasingly stricter when it comes to regulations. The essence of crypto is a free payment infrastructure and too much regulation does not help that.

Still, people seem to recognize that crypto can definitely be the money of the future, as Bitcoin is up about 50% this year and many other cryptocurrencies experienced even much larger increases.

2021 closed uncertainly, so we are curious to see how 2022 turns out. We are also looking forward to all the new developments in 2022, because there will definitely be some.

All in all, it has been a sad year for the world, but a great year for crypto. Let's all hope that next year will be a great year for both. In any case, we will be back to keep you updated on all the latest crypto news.